Will the Corona-Crisis lead to higher Inflation? 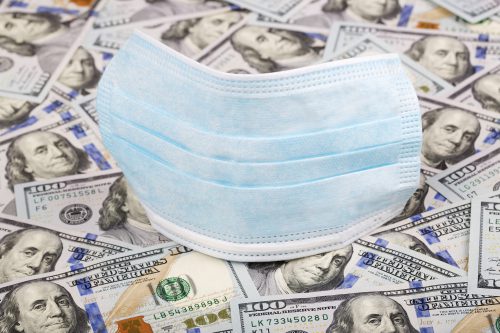 Will the Corona-Crisis lead to higher Inflation?

Staggering amounts of money have been printed by global Central Banks and record fiscal spending programs have been announced to combat the still ongoing Corona-Crisis.

Asset prices in general have reacted positively, with the S&P 500 rebounding significantly from its March low and Gold prices rising to over 1700 USD per ounce. While the global economy will suffer one of the worst recessions since the Great Depression, the declining  rate of new corona infections and the opening of more and more parts of the economy seems to assure market participants that a recovery will come under way. At least, this is what the elevated index readings of about 2900 Points in the S&P 500 tell us about the current market sentiment. Many market participants, economists on Wall Street and even on main street are starting to discuss the likelyhood of rising inflation rates due to the massive montery stimulus, as can be seen in the chart below:

Gold markets seem to reflect this, with many investment banks calling for Gold prices of 2000 USD and more due to the ultra-low interest rates and the prospect for higher inflation. To properly evaluate the after-effects of the Corona-Crisis on Inflation, we have to understand, that sticky, or lasting inflation is mainly uccurring under 2 economic scenarios:

The second circumstance is mainly occurring in smaller emerging economies (like in Turkey over the last years), since the effect of a devaluation of the currency of very large, highly developed economies such as the Euro-Area or the US is not causing imported inflation to rise in significant amounts to quickly start this feedback loop. Large developed areas are more self-sufficient and have high value-added products, which means that rising input commodity prices such as oil are not changing the end-consumer prices by a large degree to start an inflation spiral. Even the very loose monetary policies and the “twin deficits” (trade deficit and budget deficit) duringt the Bush administration of the 2000s could not start a lasting inflationary spiral in consumer prices, although the USD was trading at record lows.

Therefore, the likelyhood for rising inflation rates in the short term (that is the coming months or even a few quarters) looks remote, since many people lost their jobs and aggregate demand will remain relatively weak.

The most likely outcome for the “real economy” for the next several months or even quarters is the so-called 90% economy. While the lock-down measure have prevented a ultra-fast worldwide spread of the Corona-Virus, this also means, that the “herd immunity” has not been reached. Still only a minority of people has contacted the virus, and only those have built anti-bodies, which should give them immunity at least for several years. The lockdown measures had the effect of slowing down the spread of the virus to prevent a collapse of the health system, but – since no vaccine has been found yet – this also means the we will have to live with the virus for quite some time. It is most likely that the first and biggest wave of infections will have passed by early summer, but that minor local waves or even medium sized nationwide waves will be a common feature of the rest of the year. This means that the economy will operate at a 90% level at best, while the measures might be temporarily tightened regionally again.

Such an economic environment is unlikely to cause rising wage pressures and consumer prices in the short term. Too many people are unemployed and aggregate demand will be week. Also, it seems likely that the rest of the economy will ensure enough goods and services that there will not be any sustained shortages. As such it seems that all the printed money will stay trapped in bank deposits and the financial markets for as long as the economy operates on a “90%” basis. So the monetary stimulus will surely cushion financial markets, but will once again – like after the financial crisis of 2008/9 – not reach the real economy, at least not in the short term.

Medium and longer term, things might look different to the financial crisis back then. Once most of the population (virologists say about 60-70%) have contacted the virus (which by the way does not mean that everybody having contacted the virus will become sick or show symptoms), all measures can be taken off and the “backlog” or “pent-up” demand can kick in to push the economy in growth mode back agian.
Also it has to be considered, that the “health of the economic structure” was clearly better that before the financial crisis. While the ultra-low interest rates have surely caused some distortion and some “zombie” companies to survive longer than they should have, there was not such a single concentrated “bubble sector” like housing (pre-2007) or the internet bubble from the late 90ies. Therefore it is likely that the economy should be able to recover better with less restructuring after the measures have been fully lifted and the stimulus money starts to circulate and engage in new investment projects. The banking system is nowadays in much better shape than during the financial crisis and politicians and regulators are calling for more relaxed lending standards to combat the crisis. This is in contrast to the aftermath of the crisis of 2008/9 when the overleveraged banking system was deleveraging and contracting their balance sheets, thereby offsetting a large part of the amount of monetary stimulus that was released back then.

Given the extraordinarily high debt levels of government finances in the US and Southern Europe and given the fact that the Corona-recession will lead to exploding deficits (with tax revenues decreasing and bail-out spending increasing sharply) it seems very likely that ultra-low real interest rates are here to stay much longer. The emphasis here should be on real interest rates, since an accelerating economy would could lead to a jump in interest rates, which would need to be prevented by the Central Banks in first instance. Therefore it seems very likely that Central Banks will start a “management of the yield curve”, because they need to keep interest rates very low for a prolonged period of time, so long as to ensure that governments stay solvent and the economy is growing (at least nominally). This seems to ultimately lead to wage inflation once full employment is reached and this will also lead to rising nominal (but not real) interest rates, since the Central Banks will keep the nominal interest rates in check to ensure government solvency.

It has to be understood here, that longer term, the path forward for government finances strongly favors an inflationary solution, because the accumulated debts and pension deficits will become so pressuring that they cannot be paid by rising taxation only, but rather by rising tax incomes due to rising inflation. Further, as wealth imbalances have built over time it is likely that any wage inflation of the lower and middle income groups will be politically accepted if not wished for. The subdueing deflationary factors of globalisation of the last decades – the opening of China, the price transparency of the internet, among other factors – seem to largely have run their course; this means that the enourmous amounts of money that have been created will longer term indeed have inflationary effects.

Readers who like to know about the implication on global asset prices for the medium and long term from the described macro-economic environment above are referred to our publication “PVI – ETF Portfolio” that can be purchased in our shop.

This website uses cookies to improve your experience while you navigate through the website. Out of these cookies, the cookies that are categorized as necessary are stored on your browser as they are essential for the working of basic functionalities of the website. We also use third-party cookies that help us analyze and understand how you use this website. These cookies will be stored in your browser only with your consent. You also have the option to opt-out of these cookies. But opting out of some of these cookies may have an effect on your browsing experience.
Necessary Always Enabled
Necessary cookies are absolutely essential for the website to function properly. This category only includes cookies that ensures basic functionalities and security features of the website. These cookies do not store any personal information.
Non-necessary
Any cookies that may not be particularly necessary for the website to function and is used specifically to collect user personal data via analytics, ads, other embedded contents are termed as non-necessary cookies. It is mandatory to procure user consent prior to running these cookies on your website.
SAVE & ACCEPT
error: